Communicating the Climate & Ecological Crisis to people in power

Communicating the Climate & Ecological Crisis to people in power

Individual actions are very important, but we also need those in power to take action. I will discuss how we can engage our MPs and local politicians in action to combat the climate crisis

When the United Nation’s advisors on the Climate Crisis declared “Code Red for Humanity” in August, their spokesperson said that the single most important thing we can all do to prevent disaster is “speak to those in power”. The Grantham Institute on Climate Change at Imperial  College, London, lists the 9 things we can do about climate change, top of their list is “speak to those in power,” followed by “eat less meat and dairy”, and “take fewer flights”.

We know changes in our own lives are important and do make a difference, but we also need the UK Government to stop all new coal, gas and oil development, to change building regulations so that all new homes are zero carbon, to retrofit existing homes to make them as low carbon as possible, in short, to legislate to ensure industry cuts carbon emissions further and faster.

Fortunately, this is a quick and easy task. Over your next coffee/tea at home, send an email to your MP saying you are very worried about the climate crisis and would like to see the Government take more action, faster, to back up their aspirations with actual policies that will deliver change before the next election.

Next week, resend it, and resend at least weekly till you receive a reply.
You will probably receive a reply telling you the Government has it all in hand.
Email again, saying you appreciate all they are doing but it’s clearly not enough. Repeat weekly. Have fun! 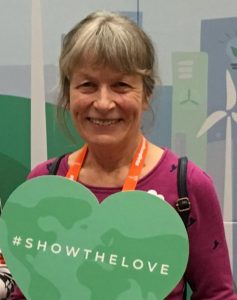 We use cookies on our website to give you the most relevant experience by remembering your preferences and repeat visits. By clicking “Accept All”, you consent to the use of ALL the cookies. However, you may visit "Cookie Settings" to provide a controlled consent. Read More
Cookie SettingsAccept AllReject All
Manage consent

This website uses cookies to improve your experience while you navigate through the website. Out of these, the cookies that are categorized as necessary are stored on your browser as they are essential for the working of basic functionalities of the website. We also use third-party cookies that help us analyze and understand how you use this website. These cookies will be stored in your browser only with your consent. You also have the option to opt-out of these cookies. But opting out of some of these cookies may affect your browsing experience.
Necessary Always Enabled
Necessary cookies are absolutely essential for the website to function properly. These cookies ensure basic functionalities and security features of the website, anonymously.
Functional
Functional cookies help to perform certain functionalities like sharing the content of the website on social media platforms, collect feedbacks, and other third-party features.
Performance
Performance cookies are used to understand and analyze the key performance indexes of the website which helps in delivering a better user experience for the visitors.
Analytics
Analytical cookies are used to understand how visitors interact with the website. These cookies help provide information on metrics the number of visitors, bounce rate, traffic source, etc.
Advertisement
Advertisement cookies are used to provide visitors with relevant ads and marketing campaigns. These cookies track visitors across websites and collect information to provide customized ads.
Others
Other uncategorized cookies are those that are being analyzed and have not been classified into a category as yet.
SAVE & ACCEPT
Powered by